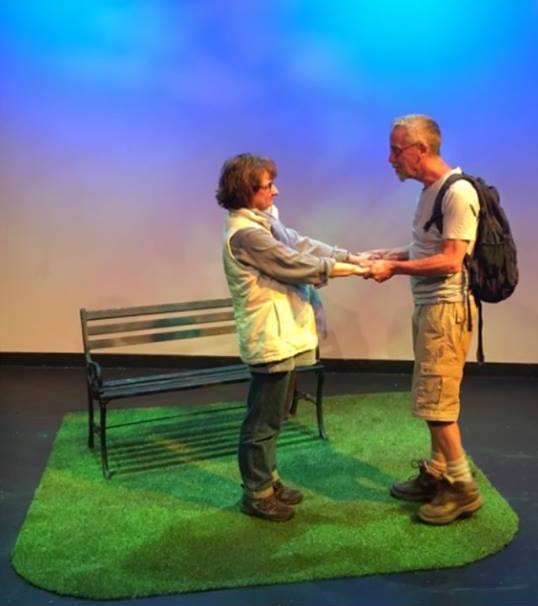 SAME VIEW, DIFFERENT HORIZON
​
IT TAKES COURAGE TO START AGAIN
Naming The View is a contemporary story inspired by the problems presented in Shakespeare’s play The Taming of the Shrew.

On a bench, gazing at the gob-smacking view from Cleeve Hill, Kate is unexpectedly joined by an irritating acquaintance from her past.  An awkward conversation slowly reveals why their hopes and dreams never matched their expectations. Eventually they find the courage to break the shackles of controlling partners and to relish the joy of freedom.  It is never too late to explore new horizons.

NAMING THE VIEW – a story of rekindled friendship and healing. Touching and funny, riven with humour and hope ★★★★ Stage Talk Magazine

“NAMING THE VIEW nailing the subtleties and nit-picking pettiness of #coercivecontrol. Just awesome.” – Helen Walmsley-Johnson (Guardian Columnist and Author of Look What You Made Me Do)

"This was a more than satisfying outing. Naming the View is a simple two-hander with a rather multifaceted premise. At the surface level, it concerns Kate and Horton, two estranged friends who happen to bump into each other whilst climbing Cleeve Hill. The text behind this meeting is The Taming of the Shrew. We are joining equivalents of Kate and Hortensio some thirty years after Kate’s supplicant marriage to our modern equivalent of Petruchio. Even without this framework though, this keenly observed piece offers emotive and affecting insight into how people can become trapped in abusive relationships. It about surviving and moving beyond that abuse. Naming the View is not the first nor will it be the last play to try to unpick the misogyny that closes Shakespeare’s Shrew. The thirty year time jump and recontextualisation in a modern setting do a lot to make this play stand out. Horton’s equivocations about his obliviousness to the dynamics of Kate’s marriage are all couched in facile excuses like ‘it was different back then’. It’s a clever device that offers a pointed commentary on excusing the sexual politics of yesteryear whilst also drawing upon the historical controversy of the original play. But this is not some remote academic discussion of issues, it’s a touching, funny and sad reflection on how these issues and attitudes really do affect people.

The show is brought to us by production company Finding the Will and performed by co-directors Jules Hobbs and Richard Curnow. They are responsible not only for the very natural characters on stage but the focused scope of the entire production. Hobbs’ Kate is the unarguable core of the play but credit must be given to Curnow for mercurial turns during flashbacks between the trivial and jolly Horton in the present to the pitiful bully Pete. I mustn’t frame this as a dour piece. Naming the View is riven with humour and hope. It’s reflections on dark subject matter are enclosed within a story of rekindled friendship and healing. But there is no doubt that this does touch on some bleak circumstances and with an affecting degree of intensity. Acknowledging the dedication to the emotional reality of domestic abuse is the highest praise I can give it."
​
★★★★    Fenton Coulthurst